Six Days Before the Tempest 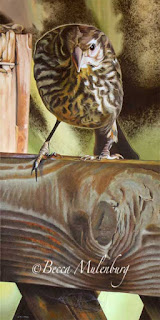 This female, red-winged blackbird may appear insidious, but she is anything but. Capturing her expression and pose was made possible thanks to the invention of Dr. Harold Edgerton. Also known as Papa Flash, he pioneered what is commonly known today as fast shutter speeds in photography. Granted, I have seen birds with this expression many times without the use of a camera. In fact, quite a few birds look mean naturally. The Bald Eagle immediately comes to mind. However, the array of photographs taken both before and after she held this pose revealed a strikingly beautiful, and curious blackbird, in perfectly fluffy plumage. The decision to paint this particular pose was deliberate because it spoke loudest to me.

Coincidentally, as I was finishing this work, Duluth received hoarfrost in late January, revealing all of those spider webs normally invisible underneath the eaves of my home. And even though the original reference photograph for this painting showed a mangled, almost unrecognizable web in approximately the same spot as the one in the painting, I didn't plan on including it until that early morning in January. One never knows what inspiration awaits outside of the front door. The late addition of a more discernible web seemed the proper complement to the painting as a whole. As for the spider itself? Well, that's for your imagination :)