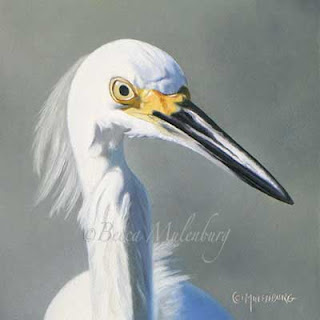 This is Marx, a very friendly, albeit injured Snowy Egret from Cocoa Beach, Florida. 122 years ago, this species was almost wiped out because of the millinery feather trade. Hat production in London and New York relied on the slaughter of whole rookeries to collect prized white feathers from herons and egrets. When two socialite cousins from Massachusetts became outraged and began their own campaign to stop the trade, things began to change. Simply by encouraging their friends to stop wearing feathered hats, Harriet Hemenway and Minna Hall created a movement strong enough to have lasting value, first with the Lacey Act in 1900 and later, with the more powerful Weeks-McLean Law in 1913. Consequently, the plume trade collapsed when it became illegal to kill migratory birds outside of regulations.

Posted by Becca Mulenburg at 10:26 AM No comments: 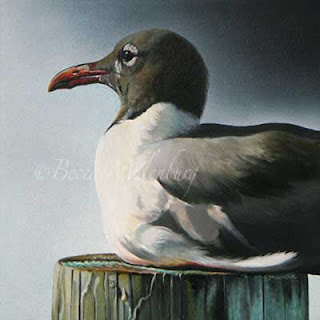 This is an oil painting of a breeding, adult Laughing Gull. These birds are found in large groups along shorelines in the United States, mainly along the southern and eastern coasts. Appropriately named, they sound like they’re laughing when they call. Since I don’t live in close proximity to these birds, I never tire of their constant clamor when I’m around them, but I can understand those that might. This particular gull was grouped with dozens of other Laughing Gulls, Brown Pelicans, Western Willets, and Royal Terns along a stretch of wood pilings, remnants of a dilapidated dock possibly destroyed by hurricane Nate last October. Taking a break from the flock for a little while, this gull took some time to rest on a piling near me.
The plumage on this bird indicates it’s at least three years old, because first and second year Laughing Gulls lack the black head and reddish beak. In fact, all North American gulls take 2-4 years to establish adult plumage. Young Laughing Gulls could easily be characterized as simply gulls without one paying close attention to subtle differences in markings between species. In North America alone, there are around 30 species of gulls, making gull identification challenging, especially before their plumage reaches maturity.

If you've missed some of Becca's older posts, simply subscribe to this blog.
Blog author/artist Becca Mulenburg removes posts
that are older than two years.

Posted by Becca Mulenburg at 10:33 AM No comments: