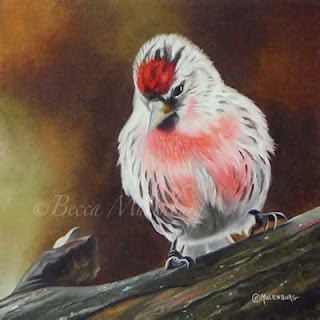 The day before more than a foot of snow fell on April 15th, a flock of Redpolls visited my feeder. These soft, fluffy birds congregate in the dozens and sometimes hundreds, when visiting. Alongside the Common Redpolls was a lovely Hoary Redpoll, perhaps a painting for a later date. Just a week later, 30-50 Dark-eyed Juncos flew in and stayed for a few days. Redpolls, which dip down into the northern United States from Canada in the wintertime, are lovely little birds whose presence I don't take for granted, especially because if I lived in the south, I'd never see them.


Posted by Becca Mulenburg at 2:23 PM No comments: 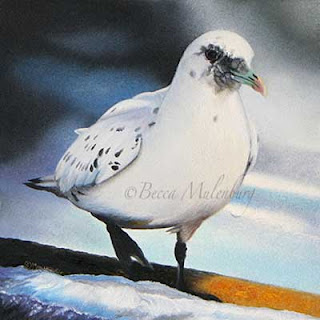 
This is the rarest bird I’ve seen, an Ivory Gull. It’s a migratory bird that lives in the Arctic and breeds only in the Arctic Atlantic sector. The American Birding Association (ABA) considers it a Code 3 bird, which means it’s a rare bird in my neck of the woods. Specifically, Code 3 birds occur in very low numbers, but annually, in an area essentially encompassing North America north of Mexico. The ABA’s classification system ranges from Codes 1-6, with the latter indicating birds which cannot be found, are extinct, or are found only in captivity.

The bird paintings I’ve done, except for this one, have been either Code 1 or Code 2 birds, i.e. fairly common. To put Code 3 birds in perspective, birders in the midst of their big year, trying to find the most species of birds in a certain geographical area will, in all likelihood, immediately stop whatever they’re doing, hop on a plane, or drive many hours, to add a Code 3 bird to their year’s list. Extremely passionate birders will do the same, because rare really means rare.

Luck was responsible for my sighting. This bird visited Duluth, MN, early January 2016. News had gotten out of its presence in Canal Park, flying amongst other gulls, along Lake Superior’s shoreline. There were plenty of bird enthusiasts around, making the bird easy to spot simply by watching where the photographers were aiming their lenses. Unfortunately, this bird was found dead days later, and the cause of death remains a mystery.

A year later, another Ivory Gull was spotted March 9, 2017, in Flint, MI. It, too, allowed birders a rare opportunity to see it, but also died within days. Unlike Duluth’s Ivory Gull, this one was sufficiently intact for necropsy results to be performed by the University of Michigan’s Museum of Zoology. “The final diagnoses were: West Nile Virus; Renal Tubular Degeneration; Renal Tubular Mineralization; Pulmonary Congestion, Pulmonary Edema, and Malnutrition (Reported),” (Petoskey Audubon, 2017).

The International Union for Conservation of Nature and Natural Resources (IUCN) lists the Ivory Gull as near threatened. Its current population trend is decreasing with possible reasons being “climate change, pollution, and increasing human intrusion or hunting within breeding areas” (IUCN, 2018).

I may never see another Code 3 bird again. It takes one to be observant in the first place to simply recognize these rare birds within our midst, so I’m grateful to the person who first saw the Ivory Gull in Duluth, and told others, whoever that was. So, keep your eyes and ears open. There may be a Code 3 bird near you.

Posted by Becca Mulenburg at 1:35 PM No comments: 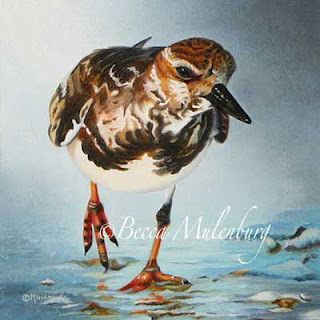 This is the second painting I've done of this bird, a Ruddy Turnstone. The first one was completed in 2013. Both paintings were chosen because I felt this bird had swagger. There are birds that I have marked for paintings that go back years, some of which I will never get to before I die.

Posted by Becca Mulenburg at 2:04 PM No comments: 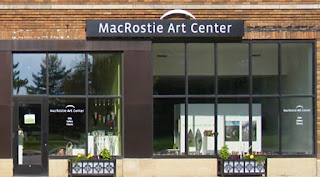 Come to the show! My painting of a Western Willet will be in MacRostie's 11th Annual Miniatures Exhibition. This is my fourth year exhibiting in the show, and those that are familiar with my work know I love miniatures. I'm grateful for shows like this. All works are under one square foot in size. Don't miss out!

In addition to the Miniature Exhibition, several of my new works will be on display for the first time ever in the general gallery area of MacRostie. So if you browse, you'll see more of my work available throughout spring/summer. Please visit when you get a chance. Your support is welcome.

Posted by Becca Mulenburg at 10:14 AM No comments: