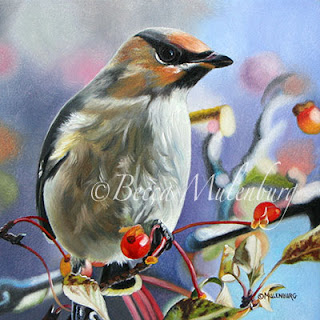 On October 15th, a flock of Bohemian Waxwings gorged on berries in a small tree in my front yard. They came through about the same time as migrating American Robins who also fed from the same tree. This time of year, I’m always on high alert to the birds that visit this food source.
Originally, I assumed the flock was Cedar Waxwings, but my binoculars revealed otherwise. I can’t tell you how many times my binoculars have surprised me, especially this fall. Anyway, this flock was quite tolerant of my presence and allowed me to take some wonderful photos. Bohemian Waxwings are nomadic birds generally found in the northern half of the United States and often descend upon fruit trees en masse, then vanish. Their audible communication is subdued and high pitched, not unpleasant to the human ear. Road noise easily drowns out a flock of waxwings.
About a year ago, a flock of around twenty (either Cedar or Bohemian) was eating berries from a small, stout tree in Duluth’s Home Depot parking lot. This tree, which is still there, is close to the front door, but located in the parking lot. Few people, if any, took notice, and walked right by. I found this incredible, mostly because it’s a good example of how trees in parking lots can herd in a flock of hungry birds without anyone noticing. In high traffic areas where concrete abounds in all directions, planting beneficial trees matters. I wish I’d see more of this on properties throughout the city, especially those blanketed with non-porous surfaces or large swaths of nothing-but-grassy lawns.
In this painting, the bird’s crest is flat, meaning it was on guard a little bit when I took its photo. In bird photography, it is always something I’m aware of. Having had a few birds as pets in my younger years, bird behavior is familiar to me, so I was careful not to disrupt this flock’s feeding by gauging the waxwings’ postures and actions relative to mine. With little indication that my presence would cause the flock to fly, I approached as close as I felt comfortable. This is where humans have a tendency to push the limits. I’ve been guilty of this many times and still continue to learn where my boundaries lie, especially in regards to different species of birds and where I am in relation to them. As with just about anything, practice and experience is helpful.
In this case, my selected boundary seemed just right. The waxwings took shelter in the very tree I was leaning against, then flew back to the berry tree to eat some more. Back and forth they’d fly, chattering as if planning their next meal and route. In another painting I hope to do one day, the bright yellows and reds of this bird are on full display, along with a gorgeous raised crest. When it comes to birds, and other creatures, observing and respecting their territory allows for a closer relationship with nature. Painting them is pretty special, too.

Posted by Becca Mulenburg at 1:17 PM No comments: 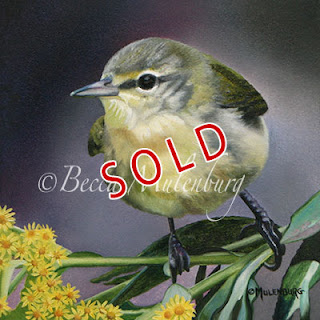 Here at my home in Duluth, MN, I have observed Tennessee Warblers coming through in the fall on their way to Central America and the Caribbean. They aren't the easiest birds to identify without binoculars. I've seen them up high in birch trees and lower in tall grasses. They spend their summers up north breeding in Canada's boreal forests and spruce bogs, laying between 4-7 eggs.

These birds are not aptly named. The only reason these birds are called Tennessee Warblers is because ornithologist Alexander Wilson discovered this bird in Tennessee. He might as well have named it Jupiter because it doesn't have anything to do with Tennessee, or 99% of North America for that matter. It may breed in northern Minnesota and Wisconsin, and also the far reaches of northeastern United States. Okay, yes it migrates through Tennessee. Sorry, doesn't count, Mr. Wilson. For shame.

In this painting, the Tennessee Warbler is perched on a goldenrod, exactly where it was when I noticed it on September 5, 2018. Goldenrod is a tall, yellow, native wildflower that blooms in late summer. In several areas where I have eradicated invasive Common Tansy, this beautiful plant has returned with gusto. If you're one of those people who consider goldenrod to be a weed, take note. Bees and butterflies love this plant.

Tennessee Warblers sing their entire song above 4,000 hertz. In layperson's terms, this means it's simply doggone high. The highest octave on a piano is in this range. Humans sometimes have trouble distinguishing differences in pitches at this level, so based on pitch alone, the song of the Tennessee Warbler may be difficult to differentiate from other birds, several of which also sing in this range.

Do you remember the song 'Lovin' You' by Minnie Riperton? When I was a kid, that was a hit on the radio. Minnie sang part of the song in the second highest octave on the piano, an F sharp in the 6th octave. That's crazy high. In fact, it's so crazy, there's a special name for it: the whistle register. It's the highest register of the human voice. As a youngster singing along to music on the radio, I tried to mimic Minnie whenever I heard that song. With little effort, I nailed those high notes. I am totally kidding people!! In another one of her songs, 'You Take My Breath Away', she went even higher and reached the seventh octave, driving home an F7. I can just hear those pop bottles shaking in the garage. Remember, this is the same octave as the Tennessee Warbler. Holy smokes, y'all. Whoa.

I hope you enjoy this painting of a Tennessee Warbler.

Posted by Becca Mulenburg at 3:15 PM No comments: