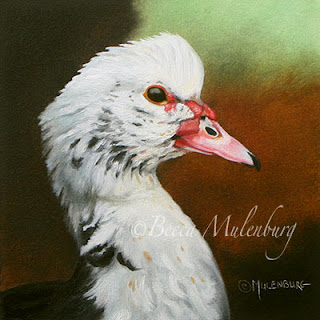 This is a Muscovy Duck. If you’re familiar with this species, you’ve probably eaten them, or you know a lot about birds. Otherwise, I’m guessing you’ve never heard of them before. I was in the latter camp until last year when I spotted several in Mobile, Alabama. From what I observed, the group was of the domesticated type, swimming and socializing in a small pond within a park-like setting next to a large office complex surrounded by mature trees. They were so friendly, I was taken aback by their carefree approach as soon as I got out of my car. It reminded me of when I was a young kid, walking about in the woods alone, until I came upon a fence, a pasture, and a whole bunch of cows. The herd of cows noticed me and they all started walking towards me. I had never been confronted by cows before, just like I’d never been confronted by Muscovies. With both, I was pretty sure I wasn't going to be killed, but I was uncomfortable, nervous, and anxious. Livin' on the edge, baby.
The feral version of the Muscovy is characterized as having almost all black feathers with a slenderer body. So, technically it's a bird I haven't seen yet. But like the domesticated version, wild ones also have the signature red caruncles on their bills. Both females and males grow caruncles, but the male’s tend to be bigger and more numerous, sometimes covering large areas of the head and neck. Although feral patches of Muscovies can be found in Texas and Florida, wild Muscovies are mostly located throughout Mexico, Central America, and South America.
Muscovies eat a wide variety of plant and small animals, and have a reputation of devouring flies and mosquitos. Yay. They mainly nest in hollow tree cavities, but will also nest in thick vegetation if water is nearby.
This painting is of a female Muscovy. She was the flirtatious star of the flock, watching every move I made. She kept a keen eye on me and raised her crest often. Of course, she was probably hoping for a morsel, but all I had to offer her were kind words and no harm.
Cornell Lab of Ornithology places this bird on their watch list due to habitat loss. This bird is not surveyed anywhere in its range, and little is known about its population.

Posted by Becca Mulenburg at 5:22 PM