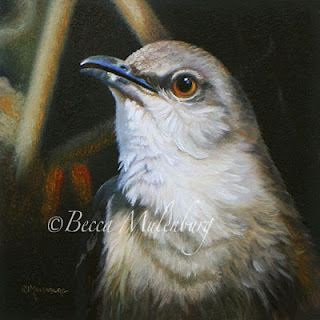 I have not had the pleasure of hearing a Northern Mockingbird sing all night long, but they are not in my territory. However, their range has been creeping northward, with climate change being the most likely culprit. If they do arrive in Duluth in my lifetime, my best chance of hearing their 24-hour bird song would be in May, June, or July.
For me, the two birds I've heard sing late into the evening or early in the morning are the Eastern Whip-poor-will, who sang on hot summer nights until around 9-10 pm when I was a child; and the American Robin, who often started singing as early as 2-3 am when I lived in Port Washington, WI.
Mockingbirds have excellent mimicry, and are perhaps the most well-known birds for this incredible feat. Like European Starlings, mockingbirds have what’s called a syrinx in their chest composed of two membranes, each having the ability to vibrate independently. This enables the bird to make both low and high frequency sounds at the same time, allowing for complex notes with wide variations. As for the song of the Mockingbird, the male is trying to attract the ladies with his chirps, tweets, zips, coos, and anything else he can come up with to woo a female in his direction. Over and over and over and over and.....

Posted by Becca Mulenburg at 7:09 AM No comments: 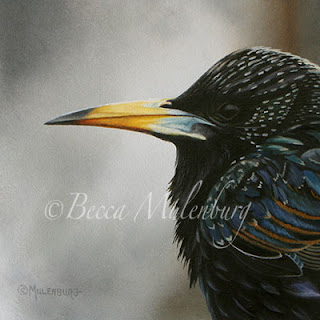 I wish I could write that this is a painting of a European Starling in Europe, but it is not. European Starlings are everywhere in the United States. They are considered an invasive species, and show no signs of slowing down. In 1890, Eugene Schieffelin purposefully introduced this species into New York’s Central Park because he had a fascination with Shakespeare. A pharmaceutical manufacturer, Schieffelin wanted every bird mentioned by Shakespeare, in this case Henry IV, to be present in the United States. So, on March 6, 1890, he released 60 European Starlings. One year later, he released 40 more. Not knowing just how devastating this decision would be, it is estimated there are more than 200 million of these birds today. They are found in every state, have spilled over into Canada, and southward into Mexico.
It’s not always the case where a species is introduced outside of its original territory and survives. In most cases, the opposite is true. But every now and then, one gets through and wreaks havoc on native species. Off the top of my head, I can name several species that remind me of the European Starling: house sparrows, lionfish, wild hogs, Burmese pythons, common tansy, garlic mustard, common buckthorn, emerald ash borers, zebra mussels, quagga mussels, and Asian carp.
Problems associated with European Starlings are their prolific breeding, their ability to nest almost anywhere, and their pugnacious nature to overtake other cavity-nesting birds, i.e. bluebirds, purple martins, wrens, flickers and other woodpeckers, all the while finding plenty of food to eat, whether insects or crops. A number of control methods have been used over the years such as pyrotechnics, hawk kites, ultrasonic sounds, owl calls, toxic chemicals, trapping, shooting, electrification, and more. No effective method to control or eradicate this species has been found. In fact, so many studies have been done on this bird, the research available was daunting, to say the least.
It seems this bird is here to stay for quite some time. So, there’s the old saying, “If you can’t beat ‘em, join ‘em.” After all, humans are still here, so in effect, has this bird not joined us, albeit faultlessly? Even so, it's a quarrelling proposition. To know the Starling is to consider how many other birds it has affected. For example, while building its nest, the Northern Flicker is hard at work while the Starling patiently watches and waits. As soon as the Flicker turns its back, the Starling moves in. The Flicker tries again elsewhere, and the cycle repeats. This happens over and over with other cavity-nesting birds as well.
To appreciate this bird without considering its negative impacts on native species, one might consider its colorful iridescent feathers, its mastery of mimicry, its ability to collectively sky dance (murmuration), and its tenacity for survival. Its bill has been described as “nearly as keen as a meat ax,” superior to that of a crow’s, and is used for probing beetles and earthworms in the ground. Of course, if other food is readily available, why bother digging? I’ve seen a flock of these birds dumpster-diving for Wendy’s French fries in the middle of an April snowstorm, wagging fries in their beaks like Churchill wagged Cubanos. I’ve watched a murmuration in Door County, WI; seen thousands gather on top of road signs at the I35/53 interchange in Duluth, MN; and I once ventured down a residential street to discover what bird was making cheery chirps and tweets in a tree. Yep, a Starling.
I was able to find an ounce of hope for our native species, besides the fact that the Peregrine Falcon is a fierce predator. In 2011, a study was published regarding the design of an artificial nest not preferred by European Starlings. As it turns out, depth matters. I’m talking vertical depth here. When choosing nesting sites, Starlings prefer a certain vertical cavity depth. Well, when it comes to what birds do in the wild, que sera sera, my friends. But humans have discovered that by building artificial nests made out of PVC tubing (27.5 cm length x 9.5 cm inside diameter), Eastern Bluebirds, House Wrens, and Tree Swallows all took to nesting in these homes whereas European Starlings and European House Sparrows, another invader, rarely took occupation, if at all. This smaller design with restricted vertical height could offer more opportunities for native cavity dwellers, leaving their European Starling competitors in the stardust. It’s a small, small victory in an ever-changing world.
This bird is doing what it does best as a species. It's being a bird. The fact that it is here in the United States, out of its normal range, isn't its fault.

Hunt, G. (2013). In Murmurations, Starlings Have a Darwinian Dance Partner. The Cornell Lab of Ornithology. Retrieved from https://www.allaboutbirds.org/in-murmurations-starlings-have-a-darwinian-dance-partner/

Zielinski, S. (2011). The Invasive Species We Can Blame On Shakespeare. Retrieved from https://www.smithsonianmag.com/science-nature/the-invasive-species-we-can-blame-on-shakespeare-95506437/

Posted by Becca Mulenburg at 2:40 PM No comments: 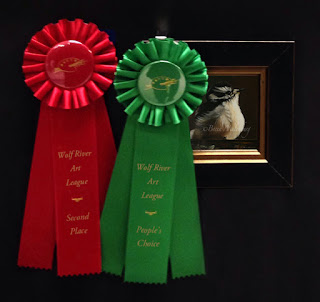 Charlie, my small work in oil of a Downy Woodpecker, won two awards this past weekend at Wolf River Art League’s Mid-Winter Art Show in New London, WI. Taking second place and people’s choice awards, this is the first time Charlie has been seen out in public. Thank you to everyone who attended and supported the show at Crystal Falls. Charlie thanks his fans, too.

Posted by Becca Mulenburg at 8:40 PM No comments: 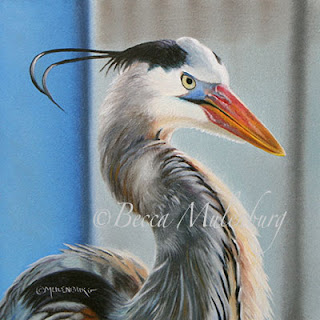 Great Blue Herons are the tallest birds in the wild that I have stood next to. They are giants and make me feel small. When I visited Dauphin Island, Alabama, I was told by a resident to be on the lookout for a very friendly Great Blue Heron named Frank. Sure enough, Frank paid a visited one day and stood on the breakwall near the shoreline very close to me.

Posted by Becca Mulenburg at 2:45 PM No comments: 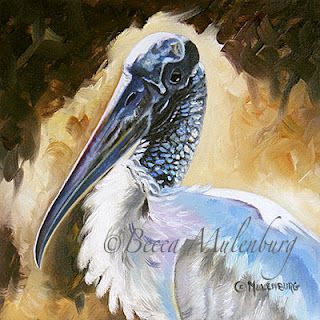 Wood Storks are considered colonial-nesting wading birds, which means they gather in large numbers when nesting and get most, if not all, of their food from the water. In the mid 1970s, a study was conducted in the Everglades National Park to determine the exact diet of these birds.

So, how does one go about collecting the contents of a Wood Stork's stomach? In order to obtain food eaten by storks, a team of scientists used two different methods. One was to simply handle nestling storks. I use the word ‘simply’ in sarcasm because I can’t imagine there was anything simple about it. In any event, similar to other wading birds, Wood Storks will regurgitate their food when being handled by humans. How convenient for the handler. For the storks, I’m guessing they would’ve rather kept their meals. Anyway, this method probably wasn’t the most practical or efficient depending on how large the sample size needed to be. Perhaps that is why there was a second method.

Using a helicopter as a giant beast descending from the skies above, the pilot hovered over a colony of storks while they were feeding, got really close (as close as 3-10 meters above the storks), then waited for a flight response. The storks started running, threw up their food, and flew off. Traps collected the samples that fell into the water. I felt a little stunned when I read about this method wondering if there wasn’t a better way.

But what about their diet? Wood Storks mainly consume fish, although the type of fish differs slightly depending on the season and location. They probe and chomp their way through shallow, brackish waters with a wicked bill-snap that's one of the fastest reflex actions among vertebrates. Typically, storks forage with their bills open, and as soon as suitable prey touches the bill, it snaps shut. Gulp. Prey gets swallowed whole. Yet, without even seeing their prey, it turns out storks are picky eaters.

The Everglades storks’ diet contained a buffet of 27 different species of fish from over 3,000 prey items collected. However, only five prey comprised of 85% of the total number. Flagfish, sailfin mollies, marsh killifish, yellow bullhead, and several species of sunfish all fit the bill. (ha, get it?) Can you imagine how stinky this research had to be? And if that doesn’t get you, how about sifting and counting through platefuls of regurgitated fish? Now that’s work I’m happy to leave to the experts and read about in their research papers.

Posted by Becca Mulenburg at 8:56 PM No comments: