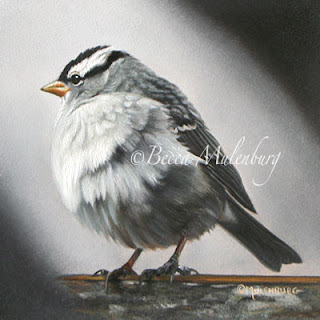 
During the fall migration of 2006, 15 adults and 15 juvenile White-crowned Sparrows were captured and transported from Washington to New Jersey, a 2,300 mile journey eastward across the continental United States. Then, they were released. Researchers wanted to know what the birds would do. Would they fly back to Washington? Would they fly southwest towards their wintering grounds of California and Mexico? Would they stay in The Garden State and make the best of it? The study revealed two outcomes, and it didn’t take long for the birds to make their move.

The sparrows were released on three different days from three different locations. Each day consisted of individually releasing five adults and five juveniles. With the aid of radio transmitters, their movements were tracked both on the ground and using Cessna airplanes (models 152 or 170 for those aircraft geeks out there). On average, the birds took less than three days to navigate more than 3 miles away from where they were released, and mostly travelled at night. So, which way did they go?

It turns out the adults and juveniles did not fly in the same direction. Wait, what? The adults headed back in the direction of California and Mexico, perhaps following what many migratory species are known to do: return to exactly the same nesting or wintering site year after year. The young squirts, however, flew in a different direction and headed south, the direction of migration. Was this because no adults had taught them the way? Maybe, but at least these little ones flew south to avoid a Jersey winter. That's gotta count for something, right? It's also good to know that New Jersey is within this sparrow's full range, so it's not like they were dropped off at the North Pole. These sparrows were already in their habitat, albeit unfamiliar. In case you're wondering where the birds ended up, none of the birds was tracked longer than eleven days. Huh. Maybe the researchers ran out of money ;)

The word instinct was thrown around a lot when I was a kid, but as acclaimed author Jennifer Ackerman writes in The Genius of Birds, “Now we know that bird navigation involves sensing, learning, and, above all, a remarkable ability to build a map in the mind, one far bigger than we ever imagined and made of strange and still mysterious cartography.” Now that's extraordinary, and a far cry from this gal who easily gets lost in parking lots.

Posted by Becca Mulenburg at 1:08 PM