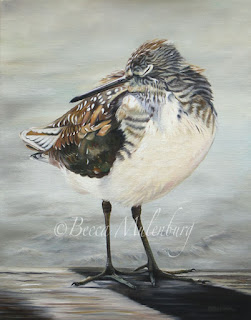 Just two of the six years living at my home in Duluth, Minnesota, have I seen Solitary Sandpipers. Both times they arrived in pairs in the month of May. Those were rather lucky sightings because they only stayed for a short time before heading to Canada or the far reaches of northern Minnesota for breeding. A small pond provided stopover habitat, and when I saw them, I was careful not to disturb them for I knew they had traveled a long way.

My observations of the two Solitary Sandpipers that visited in 2018 showed them sleeping with little concern as to my whereabouts; whereas in 2015, they were foraging for food. In both instances, they stayed less than two hours.

Solitary Sandpipers spend their winters in South America, especially around swamps and riverbanks in the Amazon Basin. They typically migrate through the United States, but recent maps now show them wintering in parts of Florida and Texas. With climate change expected to upend nearly every existing bird migration map, their predicted route shows them wintering into the southern reaches of Kansas by the year 2050; summer breeding grounds push them further north into Canada.

Posted by Becca Mulenburg at 4:40 PM