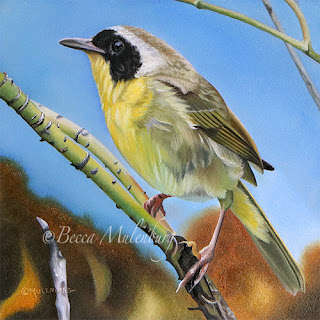 The fall migration has begun, and this male Common Yellowthroat can be found throughout the United States. Right now, they’re on the move to the southern United States, Mexico, Central America and the Caribbean. It’s a dangerous time for these warblers, and many won’t make it to their wintering grounds. Being nocturnal migrants, they’re traveling under the cover of darkness, a tall task given the amount of artificial light at night (ALAN) that illuminates the United States’ evening sky. Of all the birds in North America, 70% are migratory. More than 8 out of 10 of these migrate at night. This fall, just think of all the newborns making their first migrations ever. Whoa!

Sometimes when I read studies of birds, I wonder if there will be any birds left in the next century. It’s difficult not to feel discouraged. Humans can’t get off this planet fast enough, even though some are trying. One way or another, our species will meet its demise here on Earth; but I wonder how much of planet Earth we will have destroyed before the end comes. Did you know homo sapiens means “wise man”? Huh.

Americans in pursuit of leaving Earth built one of the largest buildings on the planet to help get them off the planet, and ironically it’s one of the deadliest for birds. The building, which covers eight acres, is called the VAB (Vehicle Assembly Building) and it’s located at the Kennedy Space Center in Florida. I have seen this building, and it is massive.

This bird that I have painted, the Common Yellowthroat, had one of the highest, autumn, kill rates at the VAB compared to other birds in a study conducted from 1970-1981. The two most important factors that led to the deaths of all birds at the VAB were bad weather and nocturnal migrant birds attracted to ALAN.

For the study, persons living in the area collected dead birds starting at nightfall and continued collecting them until the early morning. Peak death rates occurred around midnight and large numbers continued to be killed until around 3 am. Try to imagine standing at the base of a large building while birds fall to their deaths all around you. During a quiet night, just the sound alone would be heart-breaking. Could you do it? Night after night? Would you want it to stop?

Overall, spring migration kill rates were far worse than in the fall for all species of birds collected at the VAB. Sadly at the time, the total number of spring kills was among the largest reported in the United States. In total, 5,046 birds comprising of 62 species died after crashing into the VAB during both the spring and fall migrations. For the Common Yellowthroat, this bird suffered the most casualties of all birds counted during the fall migration periods at the VAB.

Keep in mind, the VAB is just one building. All across America, the night sky is becoming brighter each year. The three cities in the United States with the highest amount of artificial light at night are Chicago, Houston, and Dallas. Highlighting these cities helps to determine future conservation plans where birds can be helped the most. Coming to your local forecast in the not too distant future may be requests by meteorologists or local news media to turn off your lights on specific nights, regardless of where you live. At least the potential is there thanks to advances in observational radar technology, accurate weather forecasting, and knowing that half of migrating birds travel in the greatest numbers over a period of around seven peak nights.

On July 21st of this year, I specifically searched for this bird upon hearing it and was able to find it foraging for food in tall grasses and shrubs in a wet area. Its whichity-whichity-whichity call was hard to miss. Now that the fall migration has begun, I hope more people and business owners are taking action to help birds by turning off their lights in the evenings. It matters. Every little bit helps.

Just knowing that one person can potentially reduce bird deaths by turning off their lights at nightfall, especially during migration, gives me some hope for the future.

Posted by Becca Mulenburg at 7:16 PM