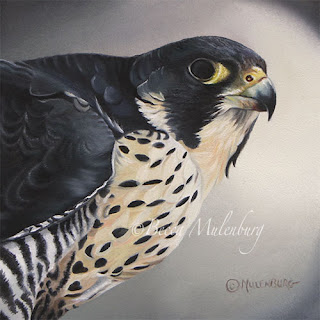 In only eight seconds, a Peregrine Falcon can accelerate from 100 mph to over 200 mph in dive formation when chasing prey. I didn’t see this falcon capture its prey, but I did observe it tearing apart a gull on top of a streetlight on February 1st in Duluth’s harbor. On an adjacent streetlight, another Peregrine Falcon waited, appearing calm, puffed out, and complacent. Nearby, two red-tailed hawks were perched atop of an old steamship getting dismantled for scrap. Around a dozen pigeons were hanging around, too. They took flight when one of the hawks changed its location. Birds of prey were busy in the harbor that day.
To measure the speed of the Peregrine Falcon, would you conduct a scientific experiment by going skydiving with one? Sounds a little crazy, but that’s exactly what pilot and master falconer Ken Franklin did. In 2005, Ken plunged from a Cessna 172 at 17,000 feet above sea level. With his trained, female, Peregrine Falcon “Frightful” at his side, released just moments earlier and flying alongside the airplane with his dad at the controls, Franklin and his team clocked the falcon’s speed at 242 mph while diving towards a lure dropped to simulate prey.
To be clear, the experiment was much more elaborate than simply skydiving with a falcon. An altimeter/computer was attached to the falcon and measured how fast Frightful descended within a specific timeframe, while other altimeters were used to compare and verify the results.
With speeds over 240 mph, could there possibly be a bird faster than the falcon? Terry Masear, author of Fastest Things on Wings, referenced hummingbirds as the title’s subject. The book, one of my all-time favorites, dives into the flight of these tiny birds, but it is hardly a book about flight alone. It is a love story, an appreciation for these small creatures we all adore. That aside, the author writes, “Although diving peregrine falcons can reach a higher speed in miles per hour, when measured in body lengths per second, hummingbirds travel almost twice as fast, making them the fastest things on wings.”
So, are hummingbirds faster than peregrine falcons? As with so many situations, there are two sides to every coin. It all depends on how you look at it.

Posted by Becca Mulenburg at 12:33 PM