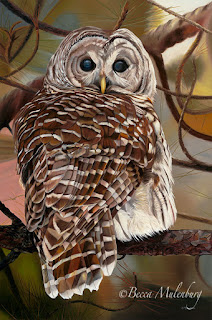 On January 5 of last year, I noticed crows gathering and squawking outside of my kitchen window. I dropped everything and grabbed my winter coat, hat, gloves and camera and headed out the door. The temperature was in the 20s. For Duluth’s standards, that wasn’t too bad. Not far into the woods, I came upon this Barred Owl sitting on a branch about fifteen feet high. Over the next several moments, after the crows left and the Chickadees quieted, it was just me and the owl. The snow depth was around 12-18 inches. Everything about this owl indicated to me that my presence wasn’t bothering it. How was I so sure? I’m never sure when it comes to wild animals, but its posture was relaxed and its demeanor calm. It simply wasn’t paying any attention to me, other than when it first turned its head after I said hello. As close as I was and with its back towards me, I felt it was the polite thing to do. That may sound strange to you, but I purposely and thoughtfully wanted to use my voice as another form of salutation in addition to my approach. I believe birds, as well as other animals, recognize calm, non-threatening human voices from those that are not.

I spent a long time with the owl in the woods, and soon it was time for me to go. Just when I was ready to head back to the house, the owl’s posture changed. It bobbed its head and stretched its neck. Its eyes were wider than wide. Then, it flew right in front of me and landed in the snow just to my left, around 20 feet away. It was hunting! I was astounded. During the time it took me to get a better view of the owl’s landing site, I wasn’t able to see whether or not it had captured its prey. If it had, it was most likely a vole, a common rodent around my home. After several moments in the snow, the owl flew high up into a spruce tree, tucked itself near the trunk, preened for a couple of minutes, then began to fall asleep. This is the story behind the painting, and I am very fortunate to have had this experience with a friendly Barred Owl.

Posted by Becca Mulenburg at 4:33 PM