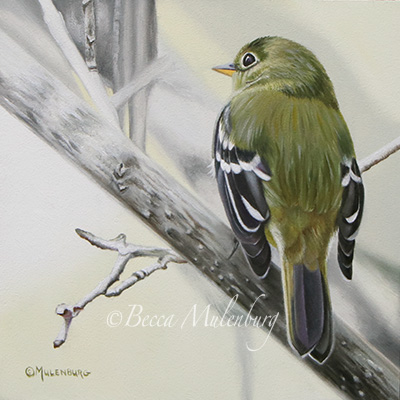 Oil on Panel, 4 x 4 inches
Now here's a good reason to take notes while birding. All the while I was painting this bird, I thought it was a Least Flycatcher. That's because there was a period of about three days in May when I photographed both Least Flycatchers and Yellow-bellied Flycatchers in the same area. I knew both species were hanging around based on their slightly different songs. Later, when categorizing my photographs, this particular bird was in a folder labeled Least Flycatcher. The problem surfaced when, all these months later, I tried to rely on my memory of why I believed this was a Least Flycatcher. Based on photographs alone, this bird could very well have been a Yellow-bellied Flycatcher, another empid of similar appearance. Now if I had taken better notes, I should've written down whether or not I'd heard this exact bird's song. I simply didn't record my observations in detail. If I had, this bird's song would've been a defining characteristic. So, it's undetermined whether or not this is a Least Flycatcher. As a matter of fact, based on more detailed photographs taken within the same time period, this is most likely a Yellow-bellied Flycatcher. Up until now, I've never painted a bird that probably wasn't what I thought it was.
Not knowing this bird's definitive species left me with an uncanny feeling, but I took comfort knowing that true to its likeness, whether Least or Yellow-bellied, this bird, even as a painting, was still catching flies. Say what? While painting this bird, I faced a head-scratching predicament. Over the course of several unusually hot and humid days in Duluth, springtails (extremely small jumping bugs that love that kind of weather) landed on my painting like never before. And I mean never. About the size of a grain of sand, I researched this pest to figure out what they were because I have never encountered them and as you can imagine, they were driving me crazy. One particular day, they interrupted my work so often, I simply couldn't paint. I found myself spending more time picking them off my painting than painting! Once the heat and humidity subsided, they were gone. In the future, if I ever paint another flycatcher, would those annoying springtails come back? For now, I don't think I'll push my luck, certainly not if Florida's weather returns to Duluth anytime soon. Being that I'm determined to finish nearly every painting I start, this one challenged me in such a way as to wish for a flycatcher on my shoulder.
Both Least and Yellow-bellied Flycatchers are long-distance migrants. Soon, they'll be headed to Mexico and Central America, having spent their summers breeding in the far reaches of the United States and into Canada.
Enjoy the fall migration everyone! It has begun.
Posted by Becca Mulenburg at 3:54 PM