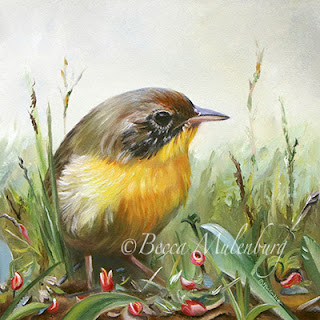 Oil on Panel, 4 x 4 inches
Word from the bird:
It's wicked starting my life this way. Mom says we'll be in the bayou soon. There's one, hold on. Darn, missed it. Those flies are really fast today, maybe I'll try for spiders. Sometimes the shade is better. She says try to stay quiet, but I'm as sneaky as I can get. Heck, I can barely hear myself skulking through the grass, you know? Maybe I'll catch a train, like my cousin Trel. If Trel made it, maybe I can, too. But my grandpa says Trel got lucky. I don't know what lucky means but my mom said it's like a bug that gets away. Well, if that's what lucky means, I don't want any part of it, because I like bugs that don't have lucky.
Wish I knew what happened. Maybe it was one of those noisy things. Mom warned me about those, she said be careful when they get loud because that means they're really close and I won't be able to hear her. I'd be on my own. Hide, she'd say. Even sticks and stones come alive and fly like darts in a hurricane. She said it's like helter skelter, and if I wasn't careful I could end up like Barde. She got hit by a cinquefoil stem, messed up her leg pretty bad. Still rather be like Barde, though.
Maybe it was Kinks, thinks he owns the place. That slimy beast sure likes scaring ducks, I'm always on alert when he's out. I'm not scared of him though, but if he hadn't startled me that one time, I would've caught that strider. I just know it. I was so close, I could almost taste it. Had I known how to speak rodent at the time, I would've told him off. Just like that time he was harassing those ducks — I'd never seen ducks fly that fast before in my life! Before I knew it, they'd almost landed right on top of me. I remember being in the grass and hopping away at the last second only to find myself in the swordy stalks. Mom calls 'em some th word I can never remember. Maybe that's when it happened, but then again, I was already having problems. Mom said I'd be hungry a lot, and I was really hungry that day, so it must've already happened. The thing is, I was so young, I can't say for sure.
Then, there's that time I was scolded because I was out wandering around. Yeah, my mom didn't like that very much but I didn't tell her all of the places I'd gone because who knows what she would've done. Heck, if she'd found out I was in the garden where the pokey chicken wire is, I never would've heard the end of it. She's always trying to protect me from losing my other eye, but now we're heading south, and she's telling me to stay on her left. She gave me an extra long peck this morning, said it's going to be a hard journey and there's lots of trouble, but I think to myself, there's lots of trouble here! How bad can it be? She said a new word today right after she gave me that peck, sounded something like goodbye. What does that mean? I'm trying to keep up. Mom, wait! Mom? Mom!!!!!
Ode to a juvenile, male Common Yellowthroat with an injured, or missing, left eye. August 14, 2020