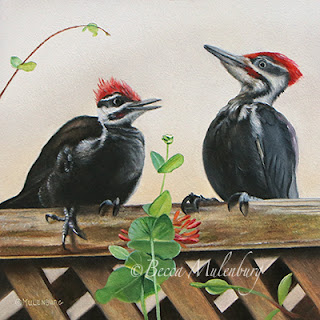 Oil on Panel - 4 x 4 inches
Pileated Woodpeckers are common where I live, although for the past few months it seems their presence has dwindled just a bit. I was accustomed to almost daily visits from these birds, but lately my suet feeder has been unusually quiet. Perhaps it was our cold February, or maybe it’s because of recently cleared, large tracts of land nearby: one for a Costco, another for a church.
Pileated Woodpeckers need dead or dying trees to survive, and anywhere I have one of those on my property, that tree stays right where it is, as long as it’s not a threat to other humans or property should it fall. Dead trees play important roles in forest ecosystems.
In May of 2018, I had a nesting pair of Pileateds in an old poplar in my woods and I’ve included a couple of my photos below. Fresh wood shavings found at the base of the tree invited my eyes to look skyward. Several feet up, I noticed a well-defined hole, and a subsequent knock on the tree produced a female Pileated Woodpecker who poked her head out to see what all the fuss was about. A couple months after she’d nested, a gray squirrel poked its head out of the same hole.
The following three paragraphs were taken from an article in Science titled “Defending Deadwood” by Kevin Krajick.
“The message is, if you want live things, you need dead trees. Humans, however, are putting the sting back into tree death: By taking too many dead or destined-to-be-dead ones for their own uses, they threaten many ecosystems.
The first to feast on sick trees are fungi, the main decomposers, followed by bacteria, yeasts, mites, and nematodes. Then the biotic chain lengthens further.
In the Pacific Northwest, it was found that 80-some animals need deadwood, starting with the powerful pileated woodpecker. The holes it drills in ailing but still-standing trees shelter not only the bird itself but also a cycle of ‘secondary cavity nesters,’ which need tree holes but cannot dig themselves. This makes the pileated woodpecker a keystone species, with dependents including nuthatches, chickadees, bluebirds, and swifts. As more space opens, mammals come: squirrels, fishers, martens, woodrats, then black bears. A study by Bull in the Winter 2000 issue of Northwestern Naturalist shows that nearly half of black bears have their cubs or rest in rotted-out tree cavities.”
I hope for the sake of future generations, the Pileated Woodpecker is adaptable enough for centuries to come, but its future, like so many other creatures, relies on humans paying more attention, stopping habitat loss, and caring about our environment more than the developments that wreck them.

****Note: Original publish date: March 5, 2021. Republished due to Blogger's admin site error. Sorry !! Some things are out of my control. Sincere apologies to my followers if you received this or any other blog post twice.

Posted by Becca Mulenburg at 10:37 AM