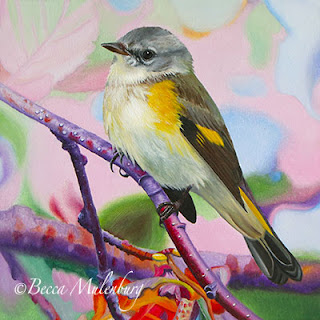 Oil on Panel - 4 x 4 inches
This isn’t one of Bob Barker’s beauties from the game show The Price is Right, this is a painting of a female American Redstart that I photographed last September from a visit to Barkers Island in Superior, Wisconsin. It was a spur-of-the-moment excursion that turned out to be a fantastic couple of hours of birding, and unexpectedly, too.
Barkers Island was recently renovated to reduce storm water runoff and protect Lake Superior’s water quality, so I was curious to see the changes to the shoreline of Superior Bay and maybe photograph a bird or two. Even though September ushers in prime fall migration, my previous visits to this area weren’t productive, so I wasn’t expecting much. On this particular trip, I think I just got lucky.
To have gotten great photos of this lovely and lively Redstart sitting still was divine. For me personally, I don’t know of too many birds in my neck of the woods that are harder to photograph besides Redstarts and Kinglets, but practice over the years has paid off. So, when this bird sat on a branch longer than two seconds after following it with my lens for several moments, I held my breath and started shooting.
Other migrating birds seen on Barkers Island were a Common Yellowthroat, Tennessee Warbler, Song Sparrow, Ruby-throated Hummingbird, American Goldfinch, Belted Kingfisher, a Least or Yellow-bellied Flycatcher and a snapping turtle (ahem, not a bird). All of these were found in a very small area along the paved walkway near the entrance, except for the snapper which was crossing the road closer to the marina.
It’s true what they say about the burgeoning hobby of birding. Birds are everywhere! Sometimes they turn up in unforeseen numbers when you least expect them. And this, my friends, is just one of the many things that makes birding so much fun.

Posted by Becca Mulenburg at 3:06 PM