The Seduction of Miss Lilly 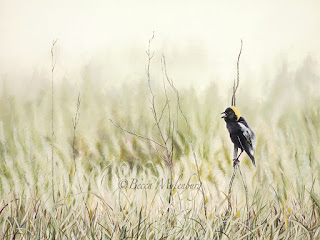 18 x 24 inches, Oil on Belgian Linen Board
When I saw that empty beer bottle, I just wanted to spit. But I didn’t even know how to spit, not that I cared to, but at that moment, I wished for a proper spit, one that was accurate in its aim, with the bullseye on the bottle. If I’d been a baseball player, my spit would’ve been accurate. Go figure. One small group of society that still spits, and not because they’re irritated.
I climbed a few steps past the litter and upwards into the field. I was thankful the ditch was dry. Still, I had been prepared to sink into the muddy grass. When I reached the top of the mountain, the mountain of prairie that is, it wasn’t as far as my eyes could see. Sadly, those places rarely exist anymore. "Urban sprawl and conversion to cropland have left this once expansive landscape, originally spanning across 14 states from Texas to Minnesota, at less than 4% of its original size."1 Farms, homes, crops, utility poles and roads dotted the landscape near and far, but as I stood in the land of Bobolinks, I knew this place was special.
Just like the faded Budweiser label, the trails in front of me were barely visible. After sorting through a few obscure possibilities, I picked one that paralleled the high ridge, away from the quiet country road. Because Bobolinks nest on the ground, the last thing I wanted to do was accidentally step on a nest full of eggs. The trails were narrow, not more than eight inches and became less visible when the wind blew, therefore my pace was slow, calculated and cautious. My goal was to learn more about Bobolinks, obtain a personal connection with their homeland and photograph them in their natural habitat.
The best part about Bobolinks, besides their gorgeous plumage, is their song. In the distance, I heard computers. The wind sometimes picked up the sound waves and made my ears perk up even more. Inflections of data were insulated beneath blades of grass, computations unknown and invisible. The sound made me giddy - another language, so foreign yet so familiar.
My childhood occurred before computers became ubiquitous, but I had never heard Bobolinks in the wild before. I wonder what I would’ve thought of them before the recognizable beep-bee-bee-boop-weeps of a computer, which I probably first heard from an original Star Trek episode in the 1970s. R2-D2 from Star Wars has been compared to the noises of Bobolinks. Right on, I thought, as I stood in a patch of sci-fi surround sound. Ten-thousand years from now if humans and Bobolinks are still around, will we ask which came first: the computer or the Bobolink? Perhaps that’s a far-fetched question, but humans have short memories and are oftentimes distrustful of historical data.
I unwrapped my collapsible chair and sat down to observe the Bobolinks in the prairie grassland. I took it all in — the warm spring air, the tall grasses, the morning sun, and the Bobolinks. Males hovered in mid-air above females hidden below, then retreated to higher perches after checking on them. Sometimes these perches were simple twigs, other times just blades of grass. Occasionally, a female would pop out long enough for me to get a glance, but rarely long enough for a photo. They were undercover and elusive. Males chased females here and there before disappearing into the field, gone in a flash. Off in the distance, Ring-necked Pheasants discharged their scratchy calls alongside the bouncy trills of Field Sparrows. Each were infrequent but regular contributors to the chaotic sounds of the Bobolinks.
I have fallen in love with the prairie ever since my first visit to Glendalough State Park in western Minnesota in 2014; and of the four biomes that exist in my state, the prairie is my favorite. To some of you, that may come as a surprise because you know how much I love trees, so it’s entirely possible that if I lived on the prairie, I’d eventually yearn to be closer to trees. However, the grasslands have stolen my heart from the coniferous forest biome where I currently live. I hunger to return.
Departing the land of Bobolinks, I exited the same way I came in, slowly and carefully. Towards the road, that old beer bottle pierced my eyeballs once more. American journalist Sydney J. Harris once said, "When we have 'second thoughts' about something, our first thoughts don't seem like thoughts at all - just feelings." My initial feelings about that piece of trash lying in the ditch had changed, and my second thoughts altered my point of view. No longer was that bottle an eyesore. Birds don't always cooperate when you want them to, so I considered it a good luck charm in my pursuit of the Bobolinks. I picked it up and took it home, where it serves as a reminder of my intimate perspective gained in the company of Bobolinks. Taking a negative object and turning it into a positive memento seemed like the perfect ending to a successful outing.
This painting is of one of the male Bobolinks I saw that day, all decked out in his breeding plumage. Before migrating, they molt into feathers that more closely resemble the brownish-yellow females. Bobolinks are currently traveling to their wintering grounds in South America. Theirs is one of the longest migrations of any songbird in the Americas.
The title of this work is named after Lilly, wife of famed Adolphus Busch, producer of Budweiser. Bobolinks are a declining species.
References

Information from the All About Birds website, https://www.allaboutbirds.org/guide/Bobolink/overview © Cornell Lab of Ornithology. Retrieved Sept. 16, 2021.
Posted by Becca Mulenburg at 11:34 AM