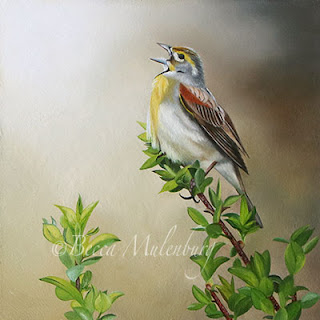 Oil on Artist's Panel - 4 x 4 inches
This is an oil painting of a breeding male Dickcissel singing atop a wild plum at Blue Mound State Park in Rock County, Minnesota. There was an abundance of Dickcissels this year, perhaps an irruptive year, and I had no trouble finding them even closer to home in June at Sax-Zim Bog. A drive along any country road with grassy ditches and open fields yielded good sounds and sightings. Their population levels are known to occasionally spike, and I have a suspicion this was one of those years.
Dickcissels are dependent upon grasslands for reproduction, and with so much of North America’s grasslands having turned to crops —mainly corn for ethanol— will the sound of the Dickcissel one day be a thing of the past? As mentioned below in my blog about Bobolinks who breed in the same areas as Dickcissels, it’s estimated less than 4% of the nation’s grasslands remain. The Dickcissel hasn’t suffered a 50% reduction in the last 50 years like some other grassland birds, but its decline has been severe and it’s listed as a species vulnerable to extinction.
As for this bird’s wintering range, almost all Dickcissels spend seven months of every year in Venezuela foraging on rice and sorghum. Many farmers in that country view Dickcissels as pests. Frequently shot, eaten or deliberately poisoned, the overall Dickcissel population struggles to return to pre-1966 levels. Fortunately, their numbers seem to have stabilized, albeit at a much lower number.
Depending how much reading and research is done on birds, being a bird lover these days can be downright depressing. On many fronts, the news is grim, especially when it comes to the declining numbers of birds on the whole with many at risk of extinction. This past summer, having experienced a high number of Dickcissels in my neck of the woods, it was a welcomed sight. I’ll take it.
On a side note, below is a photo of my buckthorn eradication efforts this fall. It isn't even close to the amount that needs to be removed, but every fall, I keep at it. Now in my fifth year of busting buckthorn, each year the piles get bigger. Sadly, control is mitigated without neighbors addressing their own property infestations. I’ve heard that’s not an uncommon scenario, but frustrating nonetheless. The pile has grown since the photo was taken, wink wink, yes I'm proud of my work. New gloves are purchased every year to stave off those dastardly thorns. 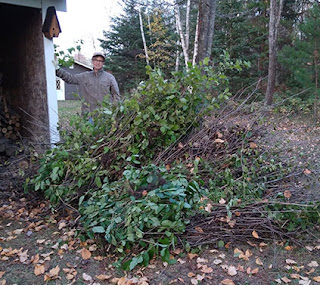 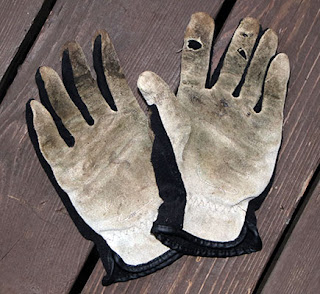 Posted by Becca Mulenburg at 12:11 PM