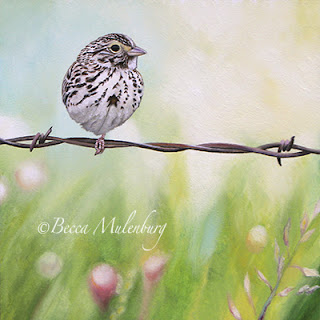 Oil on Artist's Panel - 4 x 4 inches
Here’s a small oil painting of a Savannah Sparrow near Sax-Zim Bog in northern Minnesota. Perched alongside the road on a barbed-wire fence in June, this bird sang frequently. Its buzzy, insect-like song indicated it was a male, and its song is associated with guarding its territory, courtship, and communication. I spent a long time observing this bird, and was perceptive of it becoming comfortable with my presence. Occasionally, it rested on one foot, the other tucked up into its body. Other times, it retreated to a nearby fence post to broadcast its song.
Savannah Sparrows are part of a group of birds that produce “soft songs,” a trait found in almost half of the birds in North America. Meaning low amplitude, soft songs are used for a variety of reasons, such as defending one’s territory, courting, and signaling danger. For Savannah Sparrows, soft songs are associated with the highest level of aggression – an attack on a rival during a territorial dispute.
In a study conducted by researchers from the University of Windsor and the University of Guelph in Ontario, Canada, it was determined that the most reliable predictor of an attack by a Savannah Sparrow were its soft songs. Compared to other signals of aggression such as wing waving, broadcast calls, or chip calls, territorial males, just prior to attack, sang significantly more soft songs than non-attackers.
This begs the question: if I’m a bird, why wouldn’t I sing as loudly as I could to let my competitor know I mean business? The answer may lie directly in the bird’s physique. When a Savannah Sparrow belts out its songs with its head tilted back and beak wide open, that posture may prevent the bird from seeing its rival clearly. In order to chase an intruder away, a nearly-closed beak compared to one that is wide open is advantageous. It allows the bird to keep an eye on its challenger, resulting in a productive chase. For a bird, tracking an intruder relies heavily on eyesight; and what bird can do that if it’s singing at the top of its lungs?
So if you’re out and about in a field of Savannah Sparrows and you’re skilled at picking up a Savannah Sparrow’s soft song, listen for numerous occurrences. A high number of soft songs is an excellent indicator that the bird is about to show another bird who’s boss.

Posted by Becca Mulenburg at 8:49 AM