House Wren On the Go 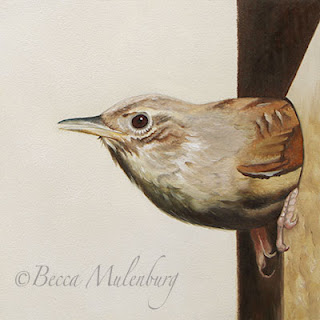 Oil on Panel - 4 x 4 inches
This year seems to be moving fast. At least for me. One of my latest paintings shown above is a House Wren popping out of its birdhouse after feeding its young. I have two birdhouses for wrens, one near my garden and the other closer to my home. Each year, one pair produces two broods and they utilize both bird houses. I love to cheer them on when they're flying bugs to their babies.
Winter dragged into spring and summer's here. When spring rolled around, tree planting was in full swing over Memorial Day weekend. It’s been an annual event since 2015. One of my favorites this year is the mulberry tree. It has grown from a twig to around four feet tall, and already has berries. Other trees that were planted include jack pines, oaks, maples, and more. Compared to last year's drought, this year’s rain has been steady and welcomed, but when it doesn’t rain for a while, I haul around 40 gallons of water using my yellow wheelbarrow to keep the saplings well nourished. It takes several trips to quench their thirst in one outing; most days I don’t mind the chore. I’ve heard it’s hard to over-water a young tree. So far, that’s been the best advice I’ve ever received concerning successful tree planting, besides protecting them from deer-browse.
As for the birds, there’s always something exciting going on. I saw my first Snowy Owl on January 15th of this year. (I know, I know, I should've seen one by now.... !!). Anyway, I finally got photos of one up in Sax-Zim Bog. Yeah, I'm a little embarrassed, but as they say, better late than never.
Closer to home, a few new species were added to my yard list. A White-winged Crossbill sang beautifully atop my spruce tree in the early dawn on January 24th. Because I didn’t recognize its song, it got my attention. And if I hadn’t heard it singing, I never would’ve looked up to the tippy-top of that spruce. In fact, its song was the main identification factor that helped me differentiate it from the Red Crossbill because my photos were too dark to see anything but an outline. Photo-editing software helped lighten up my picture and identify it as a male, but there wasn’t enough detail to differentiate between the White-winged or Red Crossbill. Only its song did that.
Spring migration brought an American Woodcock, another yard list first. It was spotted on April 6th when there were still several feet of snow on the ground. It probed for insects with its long bill and pulled up worm after worm, finding lots of food in my south-facing front yard where snow was thin. I found it mesmerizing and watched it for hours, even late into the night on one occasion. It fed until at least 11 pm before I got tired and went to bed. It stayed for a couple of days.

Male and female Blue-winged Teals were spotted on the pond May 9th. They palled around a male Mallard, as if they were friends. The teals didn’t stay longer than an hour or two. Most ducks, except for Mallards, stay less than 24 hours before moving on.
A female, White-winged Crossbill visited on April 17th and enjoyed seeds from a heavy crop of spruce cones. It was a banner year for spruce cones, they were all over my yard. She fed for several hours on the ground, gorging on seeds.
An Eastern Towhee was spotted on May 9th, another yard list first.
Two weeks later on May 25th, I photographed a Connecticut Warbler well hidden in deciduous trees on a calm, overcast morning at 8:40 am. It was just about to rain. It’s the second time this bird’s song has led me to a sighting at my home. The first time was May 24th, 2017, when it was singing from a mix of pines and deciduous trees.
May 20th and June 9th brought extra-special sightings of a hungry river otter to our pond. My husband, Terry, first noticed it on May 20th. When it came back on June 9th, assuming it was the same one, I sat nearby and watched it. Eventually, it noticed me and swam over to take a look. From 8:23 to 8:27 pm, that otter’s eyes were locked on me hard. I felt a little strange, slightly uncomfortable, but when it got bored with me, it went back to hunting. A water specialist, it brought several prey up to the surface to eat, probably frogs. 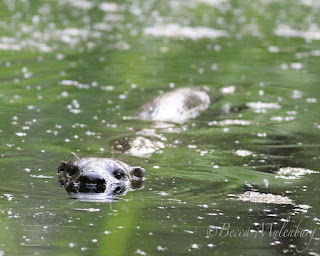 A storm toppled a tree sometime overnight on May 30th. The morning of May 31st, I photographed seven Wood Ducks perched on it. Perhaps that tree provided the perfect reprieve for those storm-weathered gents.
Currently, there are lots of baby birds around. Last night, Downy Woodpeckers, House Wrens, White-breasted Nuthatches, and Red-bellied Woodpeckers were all feeding their young at dusk. Juvenile Common Grackles have been abundant at my feeders, as well as Red-winged Blackbirds. As I write this, Black-capped Chickadees are high up in a birch tree feeding their young.
The first half of 2022 has brought thrilling wildlife sightings my way, many of which I didn't include out of fear of writing too long of a blog entry. Stay tuned for more postings, I've been a little behind this year. A couple of finished paintings are waiting in the wings, so there are more to come soon. Thank you for taking the time to read my blog. I hope you are enjoying the wildlife in your neck of the woods. Don’t forget to check out an art show or two this summer. Be well, everyone.

Posted by Becca Mulenburg at 3:18 PM

How to Subscribe to Painting My World via email

Simply fill in the Contact Form below with your name, your email address, and the word "subscribe" in the message field. You'll receive updates on new work and show announcements when they are posted. Thanks!